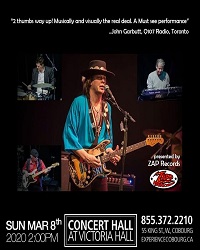 × Stevie Ray Vaughan... "2 thumbs way up! Musically and visually the real deal. A Must see performance”…John Garbutt, Q107 Radio, Toronto “I keep hearing about the SRV Experience and the reviews are never “It was pretty good”. The people are absolutely blown away. There’s a point where obsession becomes possession, and this guy might be the actual proof.”…Jay Owen, Durham Radio Group In 1983, the monumental impact of Stevie Ray Vaughan’s debut album launched a thousand musicians and fans into guitar shops and 500,000 people into record stores to buy their copy of Texas Flood . After recording 5 more studio albums and 6 live compilations, Stevie went on to win 6 Grammy awards after being nominated 12 times and selling out countless shows the world over. Though he died more than two decades ago, the guitar legend and his influence can be seen and heard everywhere as it continues to grow. Few of Stevie’s acolytes likely have the same dedication as Dave Ryan, who has spent the last decade getting the details just right as the front man of the Toronto-based band, The Stevie Ray Vaughan Experience. In addition to Dave’s attention to Stevie’s guitar work, vocals and guitar tone, there are many other visual elements of the show including a video show, look-alike hats from Stevie’s favourite, Texas Hatters, replica guitars/amps, and yes, the man even has the same blue peacock tattooed on centre of the his chest! With thousand of hours of rehearsal under his belt (and thousands of dollars getting Stevie’s sound down, replicating his amps etc), Dave has assembled the perfect players to form Canada’s premier heartfelt tribute to Stevie Ray Vaughan and Double Trouble and soon to be the worlds!