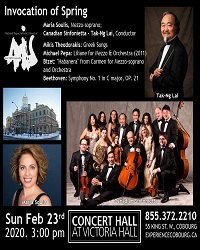 × Toronto-born mezzo-soprano Maria Soulis enjoys an exciting career in both Canada and Europe. She began her European career as a principal artist with the Regensburg Opera in Germany, later performing the roles of Carmen, Rosina, Orfeo, Dido, Olga and Nicklausse in theatres throughout Germany, France, and the United Kingdom. As a concert singer in Europe, Maria has performed Mozart's Requiem, Gustav Mahler's Rückert Lieder, Das Lied von der Erde, Symphony No. 8 and Kindertotenlieder. In Canada, she has sung repertoire ranging from Bach's Weihnachts-Oratorium and Handel's Messiah, to Dvorak's Requiem, Mendelssohn's Elijah, Beethoven's Symphony No. 9 and Elgar’s Sea Pictures. In her performance at Cobourg's beautiful Concert Hall, Maria will perform a mixed program with acclaimed chamber orchestra Canadian Sinfonietta, under the direction of Tak Ng Lai. A highlight of the program will be Michael Pepa's moving composition - 'Liliane for Mezzo & Orchestra (2011)'.'Liliane' is inspired by the true story of Liliane Gernstein, an 11 year-old girl, one of 44 Jewish children, who were rounded up in Izieu, France in 1944 and sent to the gas chambers of Auschwitz by Nazi Klaus Barbie (the 'Butcher of Lyon'). Maestro Pepa was inspired by a written account of a 1961 war crimes trial (The State of France v. Klaus Barbie) in which a poem (A Letter to God) by Liliane Gernstein was part of the evidence submitted against Barbie. The program: Maria Soulis, Mezzo-soprano; Canadian Sinfonietta – Tak-Ng Lai, Conductor Tak-Ng Lai Mikis Theodorakis: Greek Songs Michael Pepa: Liliane for Mezzo & Orchestra (2011) Bizet: "Habanera" from Carmen for Mezzo-soprano and Orchestra Beethoven: Symphony No. 1 in C major, OP. 21