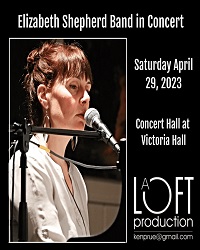 Velvety-voiced keyboardist Elizabeth Shepherd arrived on the international jazz scene in 2006 when her debut album Start To Move was voted one of the top albums of the year by the listeners of the influential Gilles Peterson Show on BBC Radio Worldwide. Since then, the Montreal-based soul-jazz innovator has established herself as one of the most alluring and imaginative artists on the scene today.

Elizabeth has been hailed as “a jazz virtuoso blessed with a pop sensibility”, praised by critics worldwide for her arrestingly original writing and soulful delivery. Alongside Esperanza Spalding and Robert Glasper, she is among the new wave of jazz-influenced musicians bringing the art form to a younger generation of music fans.

About the project: For her 8th album, Elizabeth Shepherd has created a collection of 10 songs, bringing together soulful jazz and synth-based electronica. Penned during lockdown, "Three Things" is an ode to life, joy and resilience, and features her 6-piece band. It will be coming out in 2023 (Canada) / 2024 (EU / Japan).

To hear some of the new tunes: https://elizabethshepherd.com/elizabeth-shepherd-epk

What the music press has written:

"Wholly unique and unclassifiable style that blurs the boundaries between jazz, R&B, pop and hip hop, Montreal-based Elizabeth Shepherd is perceived by some commentators as a distaff equivalent to Robert Glasper. The truth is, though, that her music is deeper and more cerebral than Glasper's ... she's more like an intellectual Esperanza Spalding" - MOJO (UK)

"A hugely original musical mind at work" - Toronto Star (CAN)

"Imaginative arrangements with a laid-back hipness" - The Irish Times

"Whether you’re a hipster, a purist or a Diana Krall-loving softie, she will win you over" - Montreal Gazette (CAN)

"One of the most creative, inventive, and delightful albums of the year" - The Voice