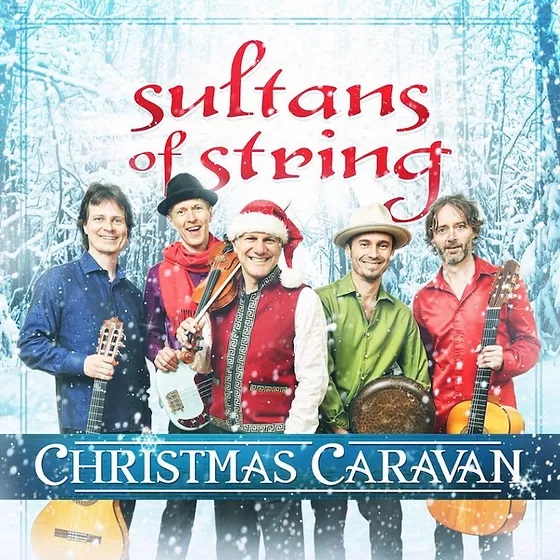 As winter crests and the mercury falls, radio stations and businesses everywhere put the seasonal hits like "Jingle Bells" and "Silent Night" on endless repeat. But for their Christmas Caravan show and album, Canada’s string wizards Sultans of String celebrate the holiday spirit with an adventurous musical trip around the world, featuring exuberant originals, world-music inspired classics, and seasonal favourites to warm your heart on a cold winter’s night.

From fiery fiddle tunes to a Caribbean sleigh ride, this surprising and delightful holiday fiesta heats up when Sultans of String bring their signature sound to well known gems such as Jesu, Joy of Man’s Desiring, a Turkish twist on Greensleeves, Silent Night, as well as a Roma-jazz inspired Django Christmas, and a Rumba-Flamenca fuelled Jingle Bells.

The show is also a special awareness and fundraising raising bash for the UNHCR. As fundraising partners with UNHCR, the band has raised over $10,000 for UNHCR: https://amplify.e-activist.com/14441/p2p/90279/sultansofstring .

“Helping refugees is a cause we care about deeply because more than 67 million refugees worldwide are in desperate need of our support. They have every right to live a safe and dignified life as much as we do”, says bandleader and Queen’s Diamond Jubilee Medal recipient Chris McKhool. “By supporting this show and partnership with the UNHCR, you are providing life-saving assistance to refugees all over the world.”

Rebecca Campbell Rebecca Campbell is an acclaimed and prolific singer who also serves up percussion, Stella guitar, melodica, and harmonica. Bred in the Maritimes and Ottawa, educated in Montreal, and now based in Toronto, Rebecca has performed with Jane Siberry, Lynn Miles, Porkbelly Futures, Parachute Club, Royal Ottawa, Ian Tamblyn, among countless others. Her gorgeous voice has graced both the big and small screen, and on over 120 recordings.